This year, One Eighty celebrates its 15th birthday. The story of One Eighty’s founder, Dr Janet Cotton, and her journey with One Eighty over the last 15 years is an inspirational one.

Janet matriculated from Wynberg Girls’ High School in 1991, and her future as an engineer was obvious, Science and Maths being her passion and the school subjects in which she excelled.

Janet went onto to UCT, where she completed her degree in Materials Engineering, after which she went on to do her Master’s Degree, which she upgraded to a PhD. Janet obtained her PhD in 2000. 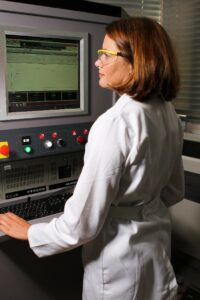 Janet’s PhD was on the development of a novel high nitrogen stainless steel developed by Columbus Stainless called Cromanite™. Cromanite is a high nitrogen austentic stainless steel which has a unique combination of strength, toughness, ductility, work hardenability and corrosion resistance. Cromanite’ s performance in materials handling applications where there is wet sliding abrasion and high-impact abrasion is excellent. Cromanite is also an excellent candidate material for a variety of high strength applications, even at elevated temperatures. In addition, Cromanite is a weldable stainless steel that can be readily cut, machined and formed. Cromanite can be cast at atmospheric pressure. Columbus discontinued the Cromanite alloy in the late stages of Janet writing up her thesis.

After completion of her PhD, Janet continued with her academic career at UCT for two more years as a post-doctoral fellow, conducting research on the optimisation of hot rolling schedules for Mittal, Hulett and Columbus.

It was while Janet was doing her post-doctorate, that it became apparent to her that academia was too slow-paced and that she wanted to practice engineering. Janet realised that her passion was to use engineering and technology to solve real life problems, and during this time, she wrote the business plan for One Eighty.

At the end of her post-doctorate, Janet considerded options for a career in academia, but chose the entrepreneurial path instead, and started up One Eighty Engineering Solutions (Pty) Ltd. That was 2002, and Janet was 28 years old – a young woman, on her own in business in a very male-dominated industry.

Janet has always loved a challenge, and she took on the challenge that was One Eighty with passion and energy. In her first year, Janet worked tirelessly – making four appointments with potential customers every day – doing the actual work that was contracted at night, and spending Saturdays on the company administration. During this time, Janet moved into offices with Acorn Technologies on Kloof Street.

Between 2003 and 2004, Janet was joined by Dr Mark Yeoman, where together they worked on the development of novel Patient Controlled Analgesic (PCA) technology with Acorn Funding and worked with orthopaedic companies to assist them with wear debris analysis.

Janet continued to extend her services as far afield as the USA and Europe for various orthopaedic device companies and a big break came when she could secure a sizable fund for research on novel ceramic materials for orthopaedic devices.

In 2005, as a result of Janet’s work in orthopaedics and the funding she has worked so hard to receive, she was able to recruit her first employees. As One Eighty grew and received more funding, Janet was able to recruit additional staff members and grow One Eighty even further. Between 2005 and 2008, Janet did commendable work out of the USA. One of her notable achievements was developing the methodology and the test for wear-particle analysis for spines, hips and knees. This work of Janet’s meant that she could carry out testing which at that stage only Leeds University were capable of doing, and Janet reported on close on 50 tests altogether.

In 2008, South Africa suffered an economic crash, and Janet put together a proposal and raised funds to do research on ceramic nano-composite materials, and researched novel materials. This project ran successfully until 2013.

In 2010, One Eighty had grown to the extent that the business moved into new premises in Observatory. In 2012, Janet raised money from the National Industrial Participation Programme of the DTI for One Eighty’s state-of-the-art metallurgical testing laboratory and moved into bigger premises, also in Observatory, and the company took on more staff.

Today, One Eighty is probably the most modern, efficient and advanced laboratory of its kind in Africa, and the company solves a broad range of real-life engineering problems in industries that include Oil and Gas, Marine, Fabrication, Manufacturing, Automotive, Aerospace, Defence, Food and Beverage and Power Generation.

Janet’s passion is problem solving – and this is what One Eighty do every day as a business, as technology and integrity partners to their clients.  One Eighty has now been solving problems for over 15 years – whether this be a main engine failure, or corrosion of pipe systems, or selection of a new material for longer life in service, or providing expert witness work, or conducting tests to generate the required information about a material, part or component.

On a more personal note, when Janet is not running the incredible business that is One Eighty, or solving problems for her customers, she enjoys getting out on the ocean on yachts, sailing, to clear her head with wind and sea. In general, Janet enjoys the great outdoors that surround her home town of Cape Town. Most importantly, Janet enjoys spending time with her daughter.

Janet and One Eighty’s story is one that will inspire any engineer – and one which commands a big dose of kudos and respect.

As materials engineers and metallurgists, the work we do at One Eighty is all about…

One Eighty has developed a Ferroxyl Test Kit in accordance with ASTM A380. The kit…